08:10
Yesterday I went to the 'Summer Repair Clinic' held locally to us by the company 'Complete Departure'    www.completedeparture.com
Recently I bought a few Victorian Centrepieces at auction - 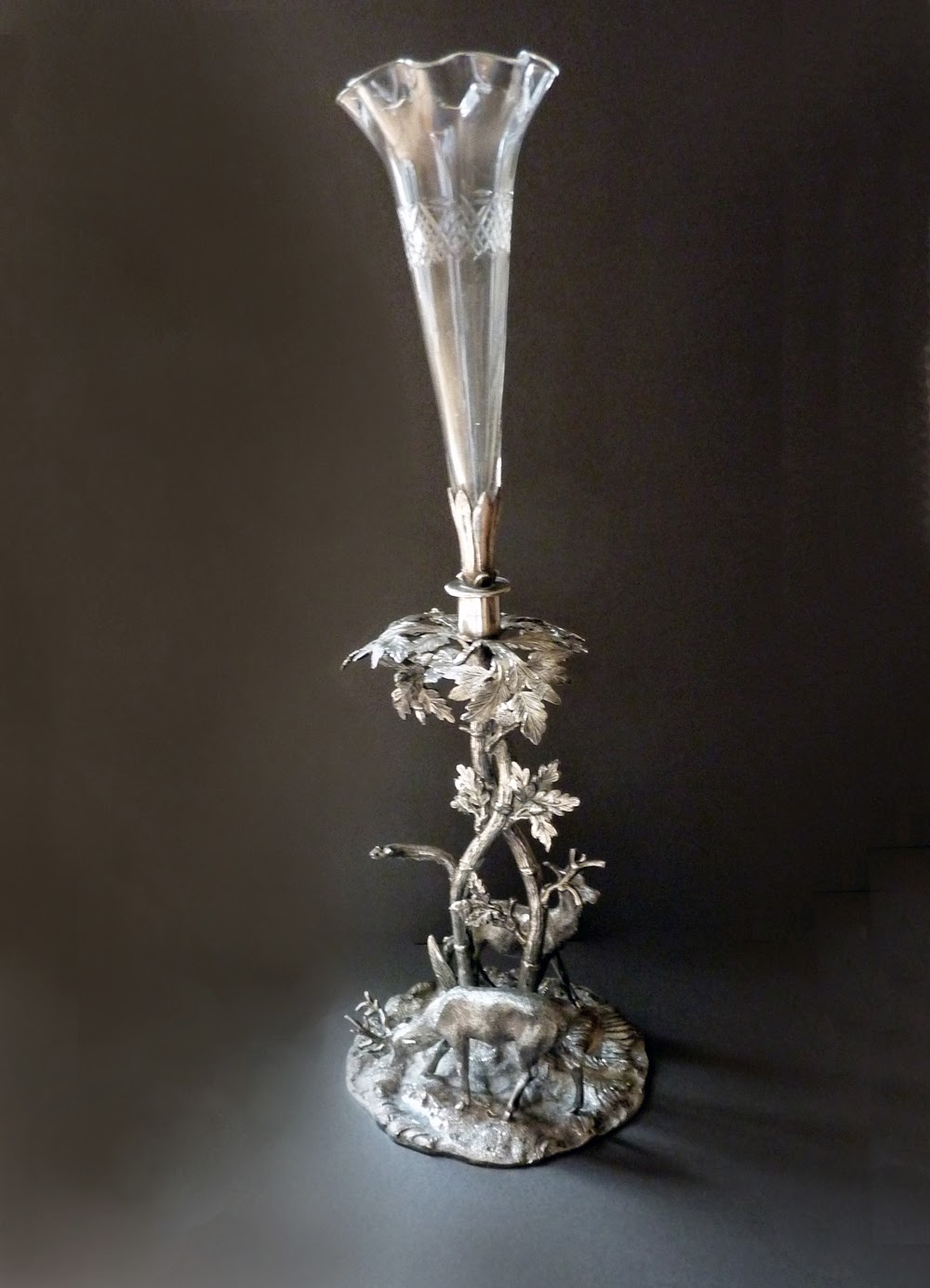 One of them was broken, so the Summer Repair Clinic was a fab opportunity to get it repaired and learn a thing or two in the process.

Complete Departure created the Summer Repair Clinic as an experimental project that aims to share their facilities and knowledge with people in order to help them do the things they would otherwise be unable to do.

Book a two hour session and have an opportunity to work with plastic, metal, wood, leather and ceramic, with the guidance from an expert. You choose how much input you'd like to have in the repair process.
At the end of the session you donate what you think the repair and your learning experience are worth.
(the charity send tools to third world countries)
www.eventbrite.co.uk/e/summer-repair-clinic-tickets-11915089353

I brought along my centrepiece which has three recumbent deer chained around a silver central column.
The column was bent and the Epergne (glass flute to hold flowers) also had missing glass from its base, causing it to be very unstable. One of the deer's antlers was missing.

In the above pics you can see the antler cast being made.

History Of A French Bulldog Bracelet

07:42
On a warm summer’s evening just after the war in 1946, two ladies with their dogs returning from Blackpool show were picnicking in a field outside the village of Quatt, just south of Bridgnorth in Shropshire, when a lady on a horse bore down on them and told them in no uncertain terms that they were on private land. She then dismounted and made a tremendous fuss of the dogs; it was love at first sight.
The trespassers were Joyce Hargreaves (Comeytrowe) and Mrs Nutting (Olveston) and the horsewoman was Joan Cottrell. That occasion was the beginning of the Quatt French Bulldogs. That same year (1946) Joan bought her first French Bulldog, a bitch called Northgate (a well-known landmark in Bridgnorth, now a museum) Pippet, bred by the Millner Deightons, a long established Bridgnorth family.
Joan’s daughter, Ann, became just as passionate about the breed as her mother and on leaving school joined her mother in what was, by then, a growing kennel. Visitors to Quatt were always welcomed and entertained by Joan, Ann popped in and out with refreshments and dogs and puppies as requested, while husband John, after initially greeting the visitors, retired to the dining room. Joan reigned over her court; everyone knew their place.
The Quatt kennel remained under Joan’s leadership until her death in 1979 and was continued by her daughter Ann until her death in 2001. A long line of successful dogs emerged, either bred at Quatt or bought in, especially clear pieds and fawns, including many champions worldwide and 31 British champions. The Quatt kennel was the first in Britain to breed champion French Bulldogs in all three colours.
Joan Cottrell had a gold link bracelet and to celebrate a Quatt champion being made up had a French Bulldog head and name tag engraved with the dog’s pet name attached. In total 12 of the 31 British champions are honoured on the bracelet, gold for a fawn and brindle, silver for a pied.
Among those that can be recognised are Ch Quatt Sno’Etta, Ch Snowmaie of Quatt, Ch Snowman of Quatt, Ch Quatt Heirenas Bambi, Ch Quatt Snoanna and Ch Quatt Snow Clown. 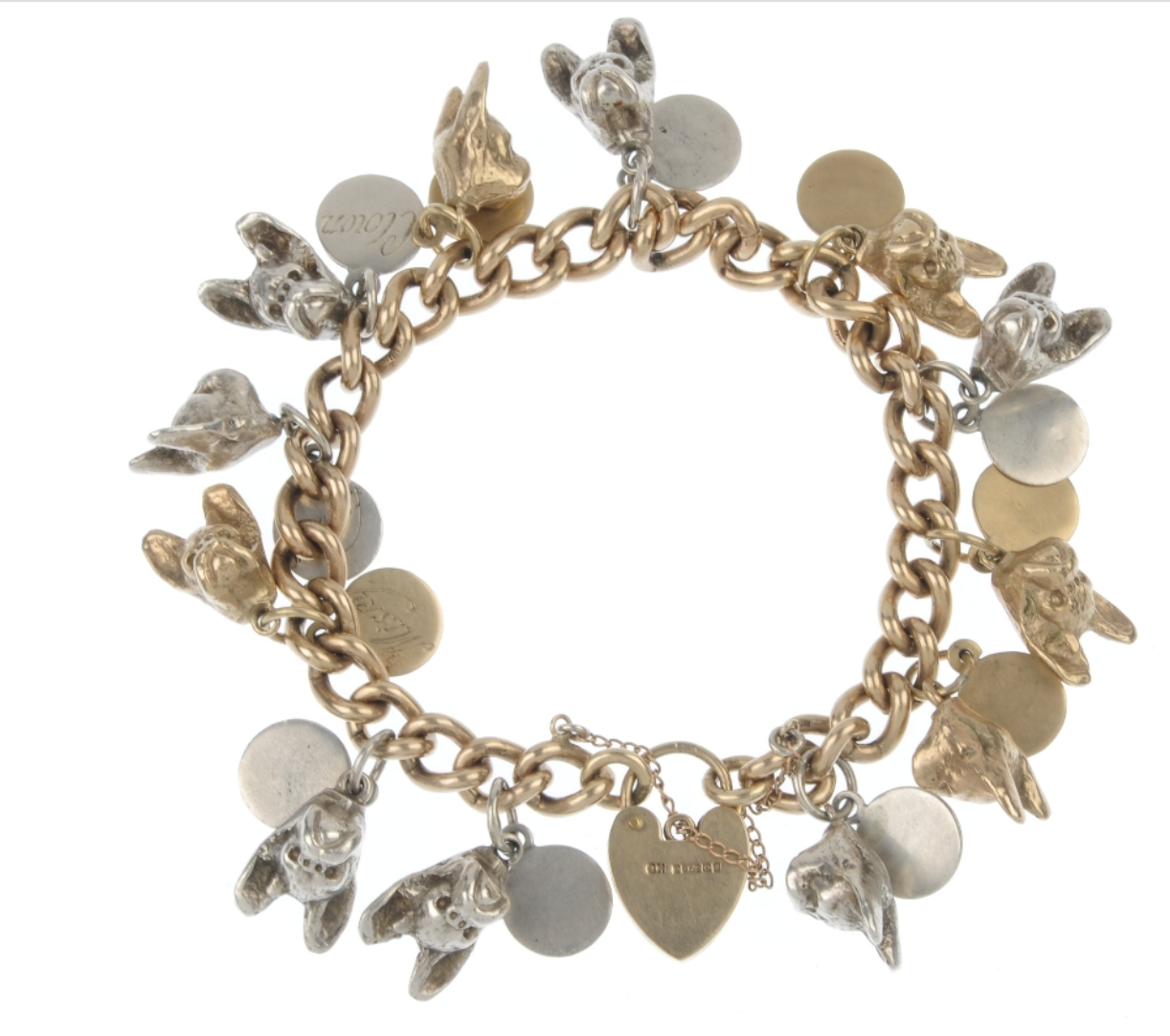 The heads were made by Arthur Payton-Smith, a master jeweller in the jewellery quarter of Birmingham, who also produced other French Bulldog pieces of jewellery. He and his family were French Bulldog enthusiasts, he owned three Quatt champions and his mother-in-law one.
Mr Payton-Smith was in dogs for over 40 years. He was a founder member and chairman of Birmingham Kennel Association, a founder member and secretary of the Midland Boxer Club and one time president of the Midland and Northern Counties French Bulldog Club. This club was founded in 1958 by a group of 31 French Bulldog enthusiasts and was the brainchild of Joan who served as its first secretary with daughter Ann as treasurer.
The bracelet appeared at auction recently in Fellows Vintage Jewellery and Accessories sale with expectations of £500-600 but perhaps not surprisingly sold well above, getting away at £1,000 to a commission bid, and yes the commission bid was from Maison  Dog!
Email This BlogThis! Share to Twitter Share to Facebook

06:07
Greyhound-type dogs are the oldest recorded in history. The breed originated some 8000 years ago in the ancient civilizations of the Middle East where hunting dogs with deep chests, delicate heads, and long legs were found depicted on the walls of early cave dwellings. They have been the subjects of art and literature ever since.

The Greyhound in Art and Literature

-The Greyhound is the only breed of dog mentioned in the Bible (Proverbs 30: 29-31).
-The first dog mentioned in literature, in 800 B.C., was the Greyhound in Homer’s Odyssey.
-In both Greek and Roman mythology, gods and goddesses were often portrayed with Greyhounds.
-In the 14th century, in Chaucer’s The Canterbury Tales, the Greyhound was the first breed to be written about in    English.
-Shakespeare mentioned Greyhounds in Henry V.
-During the Renaissance, the most famous artists of the era – Veronese, Pisanello, and Uccello – captured the elegant lines of the Greyhound in art.