Toby the Dog by Tony Wood 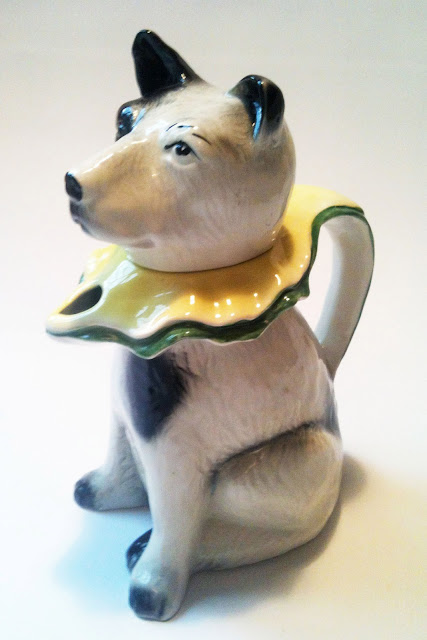 Today I purchased "Toby" Punch and Judy's Dog, a Tony Wood Staffordshire Collectors Teapot, from the Tony Wood Studios, featuring Toby the Jack Russell terrier.
Although the company was formed in 1982, the Wood family had been potters since the mid-nineteenth century when Wood & Sons was formed by Thomas Francis Wood in 1865. The company was one of the leading ceramic manufacturers in Stoke-on-Trent, commonly known as The Potteries, and enjoyed huge success. In the 1970's, Wood and Sons introduced an extremely popular line of figurative products called Toby Jugs. However, following Wood and Sons takeover by Edmund Yorke in the early 1980's, Tony Wood went into partnership with Elizabeth Capper in 1982 and opened Tony Wood Studio 1982 Ltd. The company continued production of the old Toby Jugs but introduced a whole new range of jugs, which included figurative teapots. A fire at the company's factory in Fenton, Stoke-On-Trent, Staffordshire, in 1984 halted production and the company never recovered. It went into receivership in 1991 and the company closed thus ending an association between the Woods family and The Potteries that had spanned over a hundred years.