11:57
Enamels
By the middle of the 19th century, any respectable Victorian gentleman could be seen wearing a silk or linen handkerchief, known as a scarf, passed once or twice around the neck, outside the shirt collar and tied with a bow at the front. More often than not this was held down with a scarf pin. These scarf pins might have been mounted with small portrait miniatures in enamels,or cameos and in some cases precious stones, pearls or glass. Generally set within a gold mount of varying standard, pins were decorated with a variety of subjects ranging from depictions of dogs to foxes masks, horses and portraits.
The most celebrated artist of the period was William Essex (1784- 1869). Essex found fame and relative fortune in his ability as a copyist in enamels after artists such as Reynolds, Lawrence, Wilkie and of course, Sir Edwin Landseer. In 1839 he was appointed miniature painter and painter in enamels to Queen Victoria, and from 1841 to Albert, Prince Consort. He exhibited over 100 times at the Royal Academy from 1818 until 1862, when he retired to Brighton at the age of seventy eight.
Not only was Essex technically superb, he was also responsible for a number of improvements in the art of enameling. He kept these improvements a closely guarded secret until, after the death of his son in 1852, he passed them on to a former pupil, William Bailey Ford (1832-1922).
Ford was Essex’s most gifted pupil and is recorded as having worked at the Osnaburgh studio from about 1852. After the death of his master ten years later, Ford continued the tradition drawing heavily on the studio pattern cards, so that some of the enamels are exactly the same as the Essex originals, but painted up to thirty years after the originals.
Ford also exhibited at The Royal Academy in London from 1859-1895, and like Essex enjoyed Royal patronage being commissioned to paint enamel miniatures of Edward VII in 1902.


Another famous artist in this field is John William Bailey (active 1860-1910). It would appear that Bailey also worked in Essex’s studio from about 1864, however by the mid 1890’s,
the quality of Bailey’s work seems to have deteriorated both in preparation and execution. 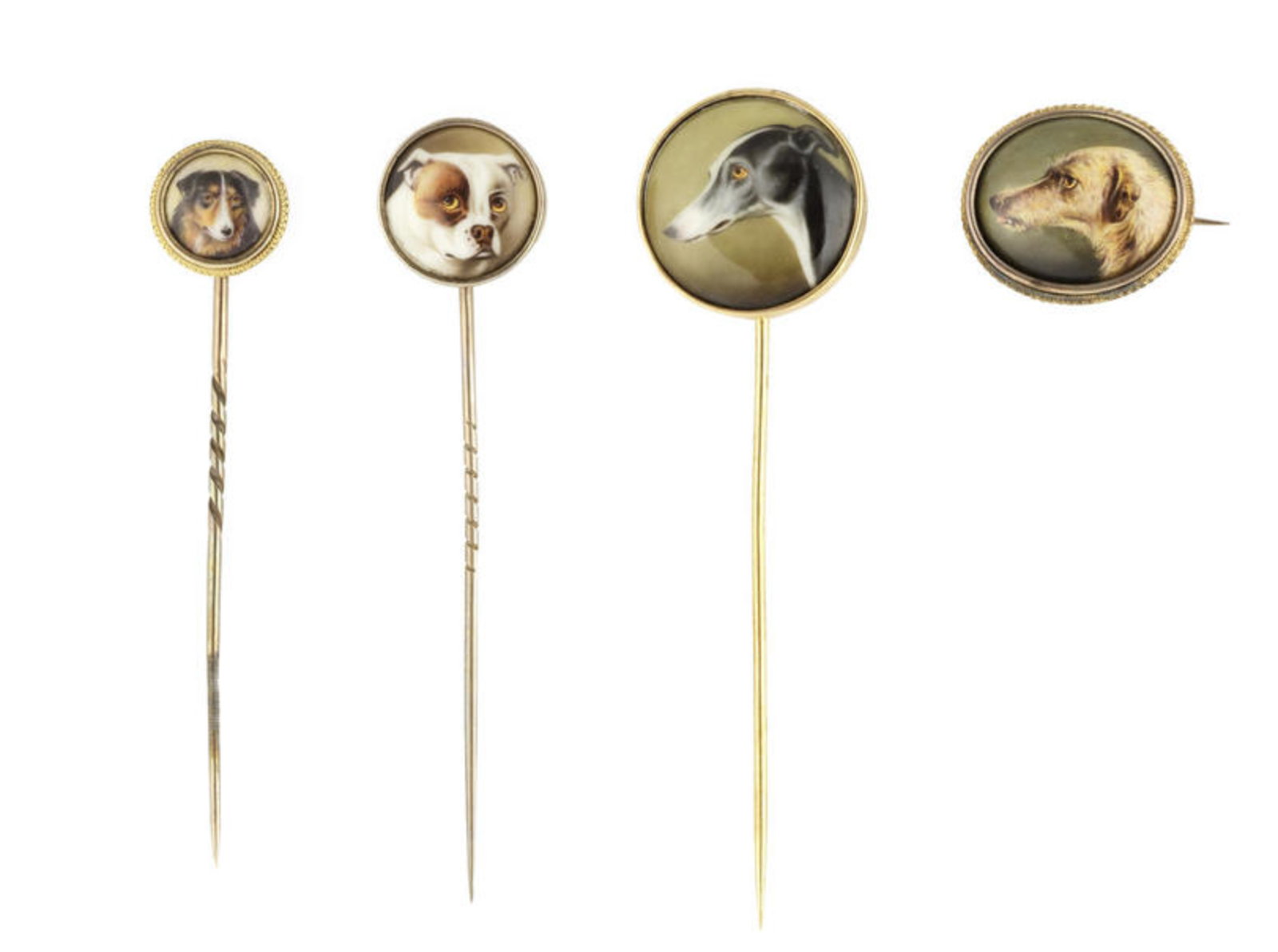 from a selection at Maison Dog
Reverse Intaglios
For many centuries, dogs, as well as horses, birds and other images have been portrayed in art.  And for the last hundred years, these subjects have been immortalized on enamels as well as on crystals through a process called “reverse intaglio”.
This technique is said to have begun in Europe, and the crystal process has been attributed to a Belgian artist named Emile Marius Pradier.  Some of Pradier’s early pieces were signed, which makes them particularly appealing.  Such was the beginning of a treasured art form which evolved into incredible works of art in miniature.
Around 1860, Thomas Cooke began making crystals for Lambeth and Company in England.  The crystals gained immediate favor, and as their popularity increased, Cooke trained a student to assist him.  This student - Thomas Bean - later trained his own son and subsequently his grandson in the crystal making process.
Crystal carving and painting has always been a family enterprise and is one of the few art forms of modern times to develop in secrecy, being passed on from one generation to the next.  Yet today, with very few artisans possessing either the knowledge or the ability to produce crystals, the process of reverse intaglio is considered to be one of the highest art forms. The popularity of these “little beauties” soared as the twentieth century began and they remained quite fashionable until the early 1930’s.
Not all carved crystals are created equally though.  There are cheap imitations of the technique produced at times.  The best way to distinguish a fine crystal is to view it with a jewelers loupe or other ten power magnifier - especially from the side.  One the very good crystals, you will notice the depth of the carving and the phenomenal detail - and you may also see that the crystal has slight chips which have appeared over time.  If the crystal is in its original mounting, the age can be assessed from the background - the earliest were done on gold foil.  As the art form developed, the backgrounds used differed.  The foil was replaced by etched mother of pearl, and this was succeeded by plain mother of pearl.
At one time, crystals were wrongfully attributed to William Essex, an artist well known  for his miniature enamel work.  Although he had no connection to the reverse intaglio process, many people commonly refer to Essex crystals even today.  As alluded to earlier, there are only a handful of current artists who are considered to be masters of the craft.
The precise physical process of the reverse carved intaglio crystal is a long and tedious one.  Rock crystal mined in Brazil and Madagascar is cut with diamond saws and then ground to the perfect cabochon.  This procedure could take as many as twenty different grades of polish, and the entire process is done by hand.  Once the stone is shaped, the design is drawn on the reverse side of the crystal with water color.  The image is then etched into the piece of stone with a scribe pencil.
The engraving begins with handmade soft steel tools.  As many as 250 of these tools may be used to execute this process.  The crystal is carved with a paste made from a combination of oil and diamond dust.  When the image has been completed to the artist’s satisfaction, he begins painting the crystal.  Just as in the carving phase, the painting is done in reverse.  Sometimes the brushes that are used have only a single hair.
The quality of a fine estate crystal far outweighs the setting.  However, the early Victorian mountings are generally as much a work of art as the crystal itself.  These mountings are usually of 18kt. or 22kt. gold, and totally hand crafted.  Estate pieces can range in price anywhere from $300.00 to $30,000 for a spectacular example.  Naturally, the rarity, the size and the quality of the art, as well as the setting and the age of these little beauties must be taken into account when determining the price. We hope this small bit of information can introduce a whole new dimension to the collector and make you want to add a “little beauty” to your life. 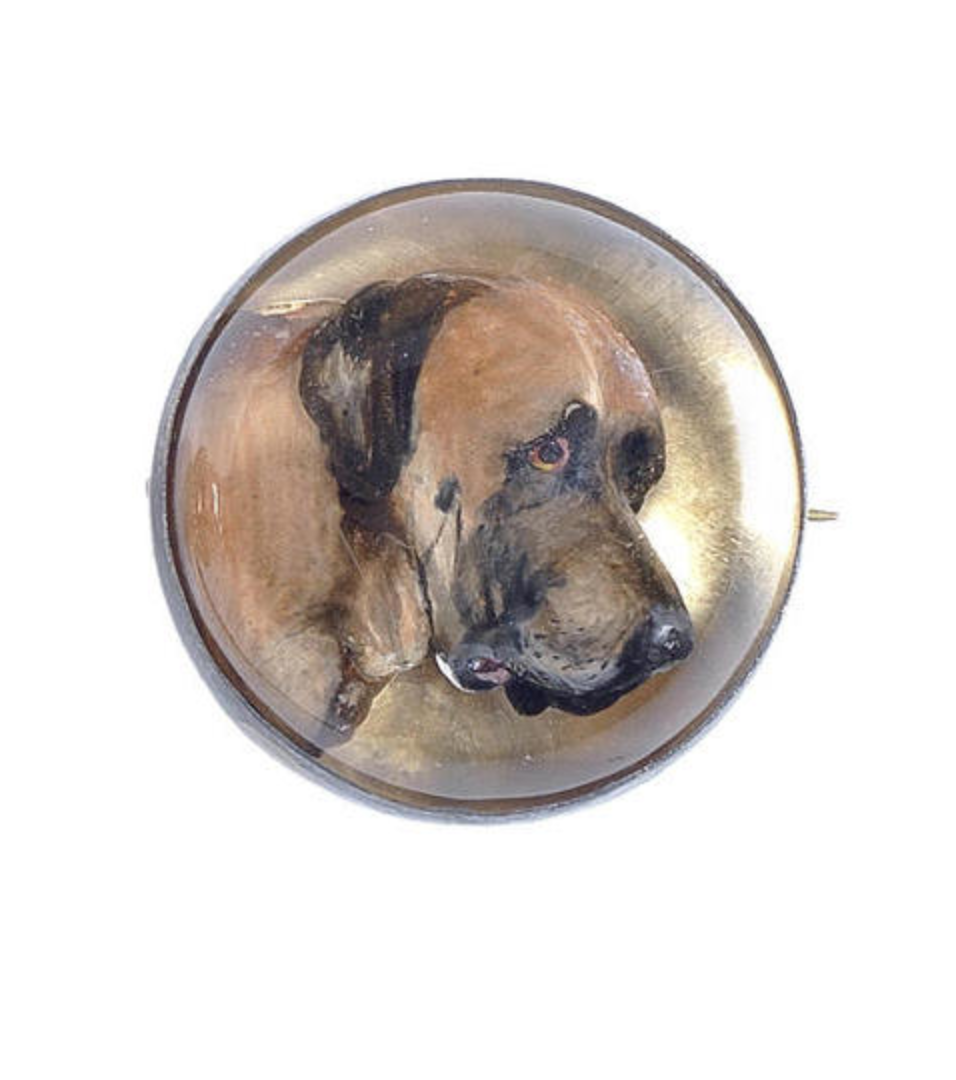